Why do we need scripts in VizArtist?
All the more so we have got a lot of ready plugins...

I like scripting because it enables to get non-existed functionality or remake existing with new options. You can significantly speed up your work, including creating complex structures, keyframes, etc. You can automize processes of getting and processing of data within a scene. Also, you can import coordinates of camera and objects from AE. The right way to create interactive elements is to use a script.

The script is a typical program. The only difference is in the level of abstraction. In classical languages, we operate with primitive data type like link, number, character. In scripts it's more convenient — high-level objects are already existing for use. For example, in vizrt-scripts, we work with containers and plugins, scenes and the engine. It's enough to assign a new position for the camera to make it to go over with natural consequences like view change.

The script is like a program. It works as an automate taking input data and giving result during a process. Input data can be anything like current container, position, mouse click or button-pushing... A result is also anything like changing of a parameter, creating or deleting anything. Of course, a script can return nothing. But why would we write it? 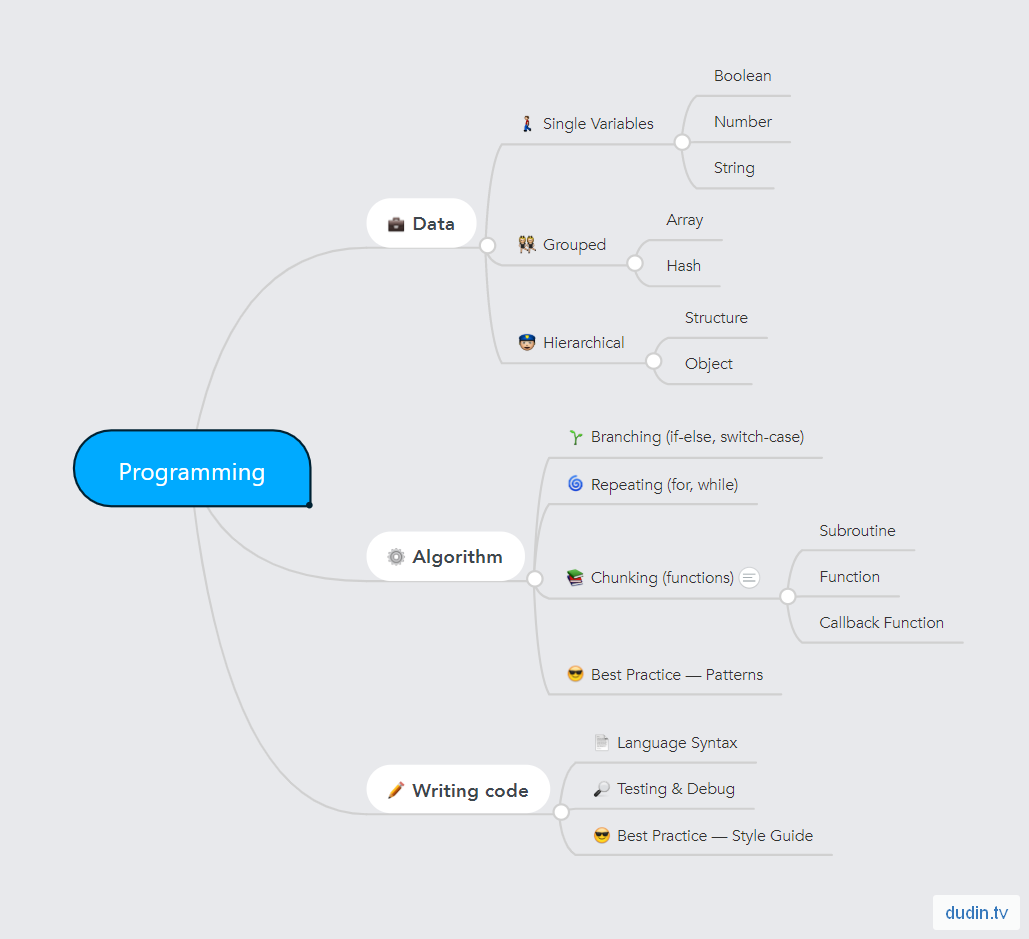 Data storage form and logical constructions are common for most programming languages. They have difference only in syntax. It's easy to learn during working because any mistakes are marked automatically by the compiler.

If you are a newbie in programming I strongly recommend you to watch a free online course "CS 50" from Harvard. The main idea you should endure is that the computer does exactly what you tell to do. Without auto thinking out, without auto assumptions, without auto finishing! You are fully responsible for what script does. In the best case, the computer will only prompt the line where is most likely an error.

Good news! There are only 7 concepts that need to be remembered and understood for the beginning. All the rest is a combination of them and syntactic features.

The basic entity of programming. Variable is a link to a certain area of data. You can get by the name of a variable: a simple number, a text string, an array value or object (about arrays and objects a bit later)...

We can conditionally divide the variables into pre-existing and custom:

Dim s As String — this is creating (declaring) of the string variable.

Vizrt-script is typed programming language. It's mean that all variables must be links to a particular type of data. No possible to declare a variable without type Dim var. If you want to create a universal variable you can declare special type "Variant" Dim var As Variant. But the best way is to specify a particular data type! Thus you forbid to compiler put text to a number variable. But if you want to convert type you can do it anytime by system functions like var = CInt("42") (we got number 42 from string "42").

You can always change the data type by system functions as needed: CInt(var), CDbl(var), CStr(var), CBool(var). And there is a special function to turning from Double to String DoubleToString(value, precision).

Key benefits of any scripts are the branching — this is the ability to choose what to do along with a condition. In vizrt-script this realized by a construction If [condition] Then [do #1] Else [do #2] End If. Where instead condition must be a conditional value (boolean type). If you need only [do #1]—block than "Else [do #2]" you can drop out (don't write it).

With the standard conversion of the number into a string, the symbol "+" will not be added as expected. How to reveal the number with a "+" sign if the temperature above zero? "If else" help us. If a temperature greater than zero we get merging "+" with a number. If not then it's nothing to add.

Question for self-test. Which do we get "output" if the temperature will be equal 0?

Frequently needed to store a list of some data. For example, a set of chart values. Creating unique variables for each value is cumbersome and extremely inconvenient for further processing.

or like this, more compact, but it's bad yet:

The simplest and convinient way is declare a variable as array data.

Question for self-test. What is the minimum number of elements the array should contain so that the script does not generate an error with values[3]?

Sweety bonus. You can get element not only from the beginning of the array but from the end! To take the last element of the array, specify "-1" values[-1]. It's much easier and human-readable than values[values.ubound].

To get experience all the benefits of arrays, let's explore the loops.

Loop is a repeated part of code while the condition is true. There are three syntax styles of a loop in vizrt-scripts. Now we take only the most practical variant For [start] to [end] [do something many times] Next.

In start sets some default value for variable-counter. It increments by 1 with each repetition until value reaches to end value.

Another kind of loop is "do while loop" syntax.

For Next is more convenient for arrays. Do While Loop more useful when you don't know how long it will work.

Note, any loop may be infinite! It's a very bad thing within vizrt-script. Infinity loop blocks the whole system! If VizEngine (VizArtist) catch this, it just emergency shutdowns the script until you restart it by hand or scene will be reloaded. So, please analyze a condition carefully. Have the condition any end value?

Most popular using of the loop is an array traversal. For example, let's calculate the arithmetic average in an array of numbers:

Exercise: write the script to find the minimum and the maximum values among array values.

Function or subroutine is a named set of commands you can call from any place of the script. It's convinient for two cases:

Function or subroutines are similar to variables. By name of variable we get access to the data, we can read or rewrite. By name of function we call the code.

There is only difference in constructs function and sub, function always must return some value. But subroutine never return anything. Both construction can change something in enviroment like a global variable, object position and so on...

Also, both constrinction can receive some input data. For exmaple, Sub fn(value1 As Integer) recieves one value integer datatype. The variable defines automatically inside the subroutine and avaliable inside Sub only. This variable will be auto deleted after the Sub is ended.

Lets create a function for convertion number to string by "temperature rule". Because we need returning value we have to use Function.

Subroutine (that haven't return value) is defined and used as a function. Only you don't need to define the return data type and don't return.

The differences between "Sub" and "Function":

The object is the way to controlling data and functions more like in real life. We intuitively define each object in the life some properties and abilities to do something. For example, some dog has 5-year-old, pink colour, etc... Thus, programming "objects" just reflects reality. It's like a list or array, but with different data types and functions. For example, object "Container" contains properties "Name", "Active"(visibility), "Count of sub-containers", etc... "Container" also has functions "Create new sub-container", "Get first sub-object", etc... All possible variables and functions are in the documentation! Please feel free to look there! ;)

Access to all properties and functions of an object gets by dot character "." — for example container.name. You can call sub-object and sub-properties consistently through points this.alpha.value

Some properties can have the status "read only". It can be read but not changed. All other properties you can read and rewrite. For example, we can get the name of container println(this.name) or rename it this.name = "new_name". But we can't change directly "Count sub-containers" property. The property will be changed if we change the real count of sub-containers.

Some functions of the object return another object. For example, let's get an "Omo" plugin on the current container and change counter of visible sub-object:

There is not possible to create your own new type object. :( We can say that all object reflects some existing entity of VizEngine or scene. But you can create your own structures! The structure is the same as an object... but it has only properties, without functions. Details and examples later (or take a look in the documentation). The need for structures is really rare in scripts.

This isn't a basic thing. But using of events we met very often into the vizrt scripts and you should know them from the beginning.

The callback function is a function that is called automatically by an external event. VizEngine tries to find in your script the appropriate function in the event moment. If VizEngine finds it then calling it. Therefore, the format of callback functions is so strong. You can't change the name of function and order input data. But there is a little convenient. Full list of all possible callback function is right at hand. Thus, you don't need you to remember them. 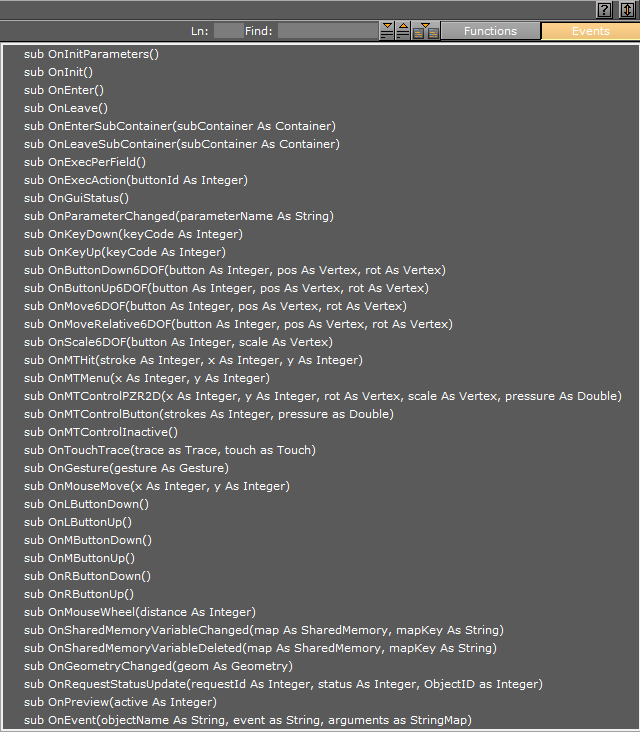 Of course, you can call callback functions by hand if it needs. For example, there is OnInit() function where must be placed start assigns. This code will be launched automatically just after starting the script and after scene loading. If I need to set variables to defaults I can call OnInit() where I want in my code. I do that usually when I want to refresh links to container and properties from the script interface. Any changing of interface calls callback function OnParameterChanged(). I just put OnInit() into the OnParameterChanged():

So, the initializing happens very rare and only when it needs. ;)

The most popular callback function (event) in the event of render frame tick — OnExecPerField. The function automatically is calling in each frame. Warning! Do, not accurate timer based on the OnExecPerField function. Even in the best performance computer, FPS isn't equal to 50 always. But for most common applications is enough. :)

Example of using OnExecPerField: there is 360 degrees rotation for some count frames (50 is about second).

If add this script to any container, it will start to rotate counterclockwise one turn by one-second approximately. If your render has 60 fps, it will rotation little faster.

One more example with OnExecPerField(). Try to understand what it does?